It’s been a great experience being the first poet-in-residence at the Leach Pottery in St Ives. With its strong Japanese connections (the pottery was founded by Bernard Leach and Shōji Hamada), it’s enabled me to continue my exploration of all things Japanese after my recent writing trip to Japan, sponsored by Arts Council England.

I’ve experienced a real generosity and openness from all the potters and staff at the Leach Pottery. My potter flat mates cooked me a huge vegan dinner as a welcome. And I never expected to be a participant on the Leach’s sought-after five-day throwing course, run by Debbie Prosser. I’d hoped to sit in a corner and watch the students’ progress. But the Leach has a ‘hands on’ approach; I was given a pinny and a wheel, and my notebook’s now full of clay-smeared poems. In addition, due to Debbie’s expert tuition, and endless patience, I’ve made some passable pots. OK, not of the Leach standard by any means but there’s some that, as a beginner, I can be proud of.

And after two weeks living and working at the Leach Pottery, I’m drafted 21 poems all relating to pottery. I’m delighted. I’ll miss the good-natured creativity of the pottery studio but maybe not the getting up at 6.30 to see how the kiln’s doing. But then, I’d never have experienced the kiln’s firing, the Leach stoneware being bricked up before sunset and watching it being unbricked and unpacked two mornings later, all the while hearing the different glazes’ ‘ting’.

Another highlight was holding a thirteenth century Chinese teabowl and a Japanese Raku teabowl from the Leach Pottery’s current exhibition, ‘The Teabowl: Past and Present’. I tried not to think about dropping them.

I know I’m going to miss choosing which texture and colour of Leach pottery mug to drink my tea from, which bowl for porridge. I’ve come to realise that porridge looks particularly good against tenmoku glaze.

I’ll be back on 1 March to run a Japanese-themed poetry workshop (sold out) and will return later in the year to give a reading of my new poems.

Huge thanks to everyone at the Leach. Here’s what they’ve blogged about my residency so far https://leachpotteryblog.com/2018/02/02/katrina-naomi-our-first-poet-in-residence/

Katrina has recently returned from a six-month Art Council England-sponsored writing trip to Japan, where she worked on her third poetry collection. She was hosted during her stay in Kofu by Yamanashi Prefectural University. 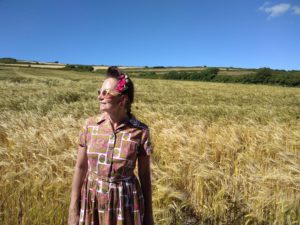 Katrina will be running an Arvon poetry course with Jen Hadfield at the end of May. ‘Come prepared to write as many

Katrina’s newsletter for March has just be published and you can read it by clicking here. ‘short & sweet’ is published every month