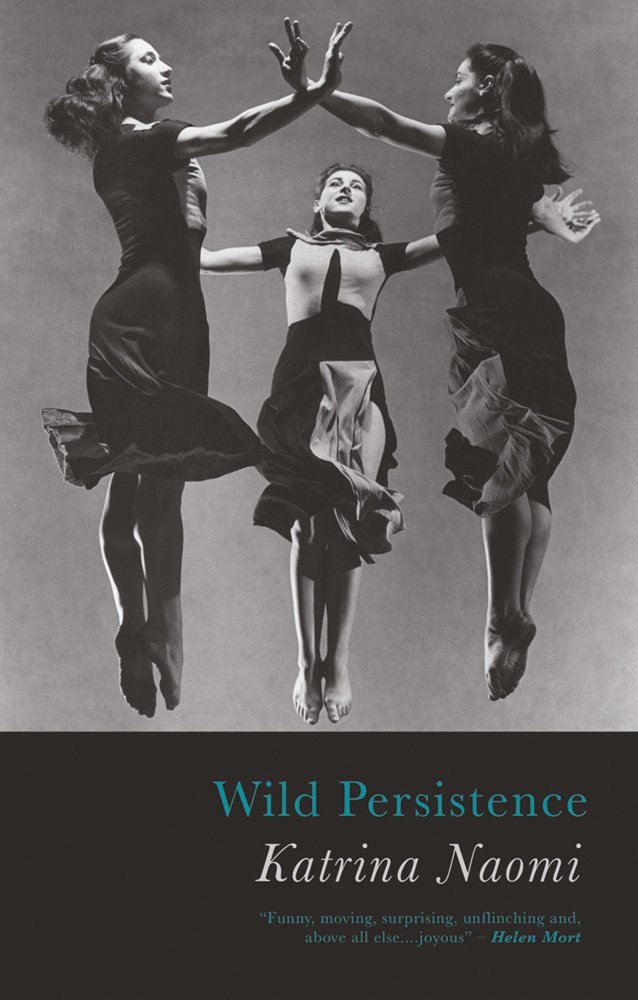 PURCHASE A COPY
DIRECT FROM KATRINA HERE
(UK ONLY)

‘This is a liberating reminder that “there are different ways to live”…nothing can suppress the wild and quirky energy at play…Wild Persistence is the joyous affirmation we need.’ – Poetry Book Society

‘Naomi takes on the subject of love in a manner that is both furious and generous, that is utterly sui generis, exhibiting a tone of wry intimacy as she escorts us – charmingly, disarmingly – through a veritable exhibition of relationships.’ – Billy Ramsell – Poetry London

Katrina Naomi’s Wild Persistence is a confident and persuasive collection of poems. The first poem ‘Anti-Ambient’ warns us to be on guard for the off-guard, to suspend our expectations of pure realism and to stay awake for what comes next.  Initially, a move from London to Cornwall sparks poems that query and celebrate the natural world. London is mourned and also derided: “you’d taken on airs/ become grandiose with the possibilities of capital.” Yet the poem also admits that the choice of a move was made by serendipitous chance: “somewhere I’d visited long ago on a rainy night, playing pool/ in a pub near a seaside bus station.”

Cornwall is not seen as picture-box pretty but from the perspective of a dedicated walker, someone who relishes the outdoors, and as an environmentalist, who in ‘Swaling on Boscathow’, helps to supervise a controlled burn on a moor, and who observes nature ‘aslant’ as in a friend’s phobia about birds in ‘Maybe Owls’, and in the strange narrative from the artist who obsessively collects mud from the cratered soles of boots.

Though never didactic, the poetic voice convinces us of the need to live well, to take time to celebrate a birthday, make love, consider an artwork, muse over the biography of someone admirable. This also means that we need to come face to face with some of the darker aspects of our experience, in Naomi’s case the loss of a father through divorce when she was seven, and the illness experienced by her sister and partner.  There is also a strong section of poems that deals with the aftermath of an attempted rape. The poetic voice is full of invigoratingly fresh outrage and is unforgiving at a distance of years to the casual passers-by who did nothing to help. She also casts a cold eye on the assailant, whom she ultimately pities, imagining him now ‘fat and in his fifties’ and destroyed by his predilection for violence.

Another appealing aspect of this voice is a wide-ranging and perpetually curious outlook, a sense of multiple voices that influence and overlay the main speaker. There are translations and adaptations from other languages, including Mexican Spanish and Cornish, plus poetry inspired by a trip to Japan. We get the sense that the poet’s love of other tongues is at one with her gusto for living. These other ways of imagining the world are evoked as something invariably enriching. In a similar vein, various successful poetic experimentations occur, with innovative stanza structures, as well as several sonnets and a ghazal.

‘This is a collection to win readers and then pull the ground from beneath them.’

‘This is a liberating reminder that ‘there are different ways to live’…nothing can suppress the wild and quirky energy at play…Wild Persistence is the joyous affirmation we need.’

‘Characteristic mastery of language and the starkness of honest, confronting poems, combined with those that make us smile and outright laugh, Naomi has given us a compelling collection, just when we need it most.’

‘A poetry collection of humour and revelry, lit by the repeated flare of violence and warmed by the unapologetic need to live the life of one’s choosing’

‘tough and rewarding poems of survival’

‘her writing is thoroughly assured’

The birds in the silver birches listened
as we shone our light over rock
jutting through the moss and grass
of the path. The night silenced us,
we became aware of the still sky
and the stars we were ignorant of.
The need for concentration was there
for the cliff fell away to our left.
At the bend in the path, the birds
took their chance – screeched and flapped
at us, as if we were intruders,
as if we had no right to the dark.
You grasped my arm, my hair,
as you forced my arm over your shoulder
and cowered – an awkward half-kneel,
the torch beam making an involuntary cross
against the woods. I’ve never known a man
make me hug him. For an instant
I considered if this was all a pretence –
your ornithophobia – but the birds
must have been pleased at their work
for you opened your mouth and screamed,
almost an enjoyment in the pitch of it.
And again – that release.
I used my in-control voice, steady
and stern, which also came
of its own volition. I heard my words,
considered them and our many selves,
considered again the shelter you took
and how the stars didn’t recognise us either,
and the night went on, knowingly.
Under my command, we walked back,
faster than we’d come. And you let my arm go.
Stood apart. And I thought, later, maybe owls,
with their whiteness, their bright moon faces,
and how quickly the quiet folded the sounds
away, blending them into the dark, the night
mending itself, the sounds carried
by the river and away down the valley.

First published in The Poetry Review